July 9, 2012May 12, 2013 hopejaazaniahLeave a comment
It’s about time for this blog post. I mean, Russians aren’t usually known for their cuisine. They sit around eating borsch, black bread, and caviar on a good day, right? Wrong! This week, I want to shatter the stereotype that Russian food does not taste good. In fact, although I may sound like I traitor to my beloved America, let me tell you a secret: I like Russian food better than American food! Yep, I said it. Russian food (to me) is not only tastier, but perhaps healthier too. Healthier, relatively speaking, that is. One of the things that I appreciate about Russian food is that everything is virtually organic. Meat, fruits, vegetables, and my favorite, dairy, are extremely fresh and are rarely processed. However, Russians have a predilection for adding heaps of fat to anything that would otherwise be considered healthy. Cabbage soup? Ladle some sour cream in! Cucumber and tomato salad? Here’s a gallon of mayonnaise! Couple that with a host mom who is the epitome of Russian gosteprimstvo (hospitality) and you have a recipe for a thirty pound weight gain! In fact, I have never seen anything in America that compares to this Russian brand of  hospitality, that at first, felt like a force feeding. The first week in Vladimir I became used to the questions (after I had eaten a Michael Phelps size meal) “Nadia, why aren’t you eating the candy I bought?” “Why aren’t you eating [insert food]? And my personal favorite, “You can keep your figure in America; here, YOU EAT!”   But although I sometimes complain about the amount and type of foods that I’m fed, in reality, I am loving every minute of it! I mean, since when have I ever had an excuse to eat sour cream by the spoonful? (Yes, I already know two of you who have excused yourself to go throw up after reading that sentence, and yes, that was hyperbole, I haven’t gone there….yet ;).
Anyway, over the next week or so, I want to introduce you all to the delectable Russian food that I have been enjoying this past month.  Here I go- Food #1: Shashlik 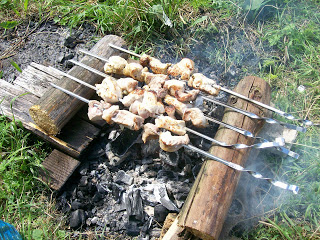 Shashlik is more than a food, it is a cultural experience. In the summer, Russians love to spend the day in the countryside cooking finely spiced meat kebabs over a fire. When explaining it to Americans, Russians usually call it a barbeque. Anyway, I got to experience the Russian shashlik experience with my Russian language partner, Alyona, her two friends, and my two American friends Jesse and Cody. We set out to the beautiful Russian countryside around noon with tomatoes, cucumbers, and enough meat to live on for a week. When we got there, we had to overcome a few barriers, as Russian men are the ones who traditionally prepare the shashlik, and Alyona and her friends had never done it before. But with the help of the Jesse and Cody, we finally got the fire started and the meat cooking. And it was delicious! Here are a few more pics of our feast: 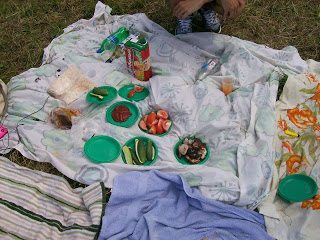 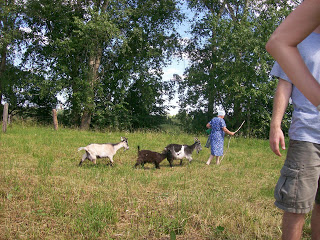 This picture doesn’t have anything to do with Shashlik, but I couldn’t resist! We saw this babushka throughout the day leading her goats around the countryside.
I hope this post has at least started to shatter any stereotypes you might have about Russian food. Next up: Breakfast!