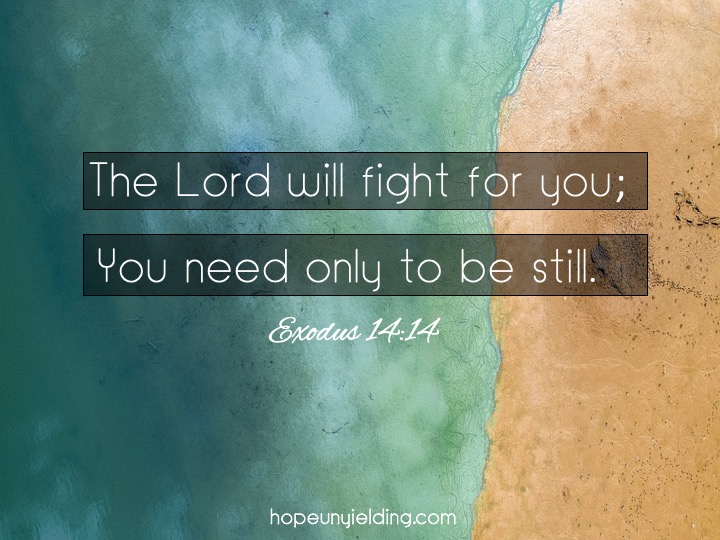 The Lord Will Fight For You

There’s a fine line between acting in faith and trying to gain freedom in my own strength. I tend to think that if I talk about a struggle enough, if I analyze it from every angle and dress it in different words, I’ll be able to finally discover some insight that will set me free once and for all from thought patterns that keep coming back to haunt me. Now don’t get me wrong, there is responsibility on my part to be proactive in setting my mind on what is good and true, the way that I’ve been approaching it until now hasn’t been effective.

I’m reading a fascinating and insightful book by J.P. Moreland, Finding Quiet: My Story of Overcoming Anxiety and the Practices that Brought Peace. Moreland, a theologian and professor, recounts his experience with mental illness (he had two anxiety-induced nervous breakdowns 10 years apart) and practical steps we can take to replace toxic thoughts patterns with what is true. One of the most enlightening things I’ve gotten from the book so far is that fighting our toxic thoughts by camping out with them and analyzing why they aren’t true actually reinforces the thoughts and keeps the neural pathway that these thoughts reside in well-oiled. Moreland writes:

“The key is not to ruminate about the message, arguing with yourself why it isn’t true or drawing out horrible implications of it. Such rumination, even telling yourself why the message isn’t true, actually depends the brain grooves that trigger the message and makes it harder to get rid of. The goal is to dismiss the message…” (71).

My strategy, so far, has been just this, to ruminate, gritting my teeth, determined to kill the negative thoughts. But I see the irony, trying to fight the battle against distorted thinking with the logic of the mind in which the distorted thinking resides is foolish. Instead, I need to “dismiss the message,” as Moreland says, by acknowledging that the thought is a lie and refocusing my attention on something solid and true.

A good friend recently said the same thing to me, that redirecting my thoughts rather than dwelling on them will play a huge part in experiencing freedom. She used the analogy of a dog being trained, a mental image which stuck with me. When the dog acts out, a smart owner redirects the dog’s attention rather than reinforcing the action through long, drawn-out punishment. So instead of punishing myself every time I have a thought that I think I should have grown past, maybe the wisest thing to do is to submit it to God, refuse to self-flagelate, and redirect my attention to something that I enjoy, whether that’s writing a blog post, listening to Susie Larson’s podcast, taking a trip to the Russian grocery store, or watching Jim put Dwight’s stapler in Jello.

When the Israelites found themselves surrounded on all sides-the Egyptians ready to strike and the Red Sea blocking their way, no human battle strategy could save them.

No human battle strategy could save them, but God could, and he did. Moses told the people, “The Lord will fight for you, you need only to be still.” (Ex. 14:14)

And God fought for them in a way only He was able: he parted the sea and His people walked to freedom. They had to step forward, yes, but it was the Lord who led the way.

In the same way, when freedom seems impossible to me, perhaps it’s because I’m trusting in my mind rather than trusting God to lead me to mental victory. No amount of analysis on my part will lead to freedom; instead, my victory will only come when I rest my weary mind, submit my thoughts to him and say, “Lord, only you can fight this battle.” So may I trust His healing process, may I rest my mind, and may I take joy in the fact that He is fighting my battles, and that He always wins.