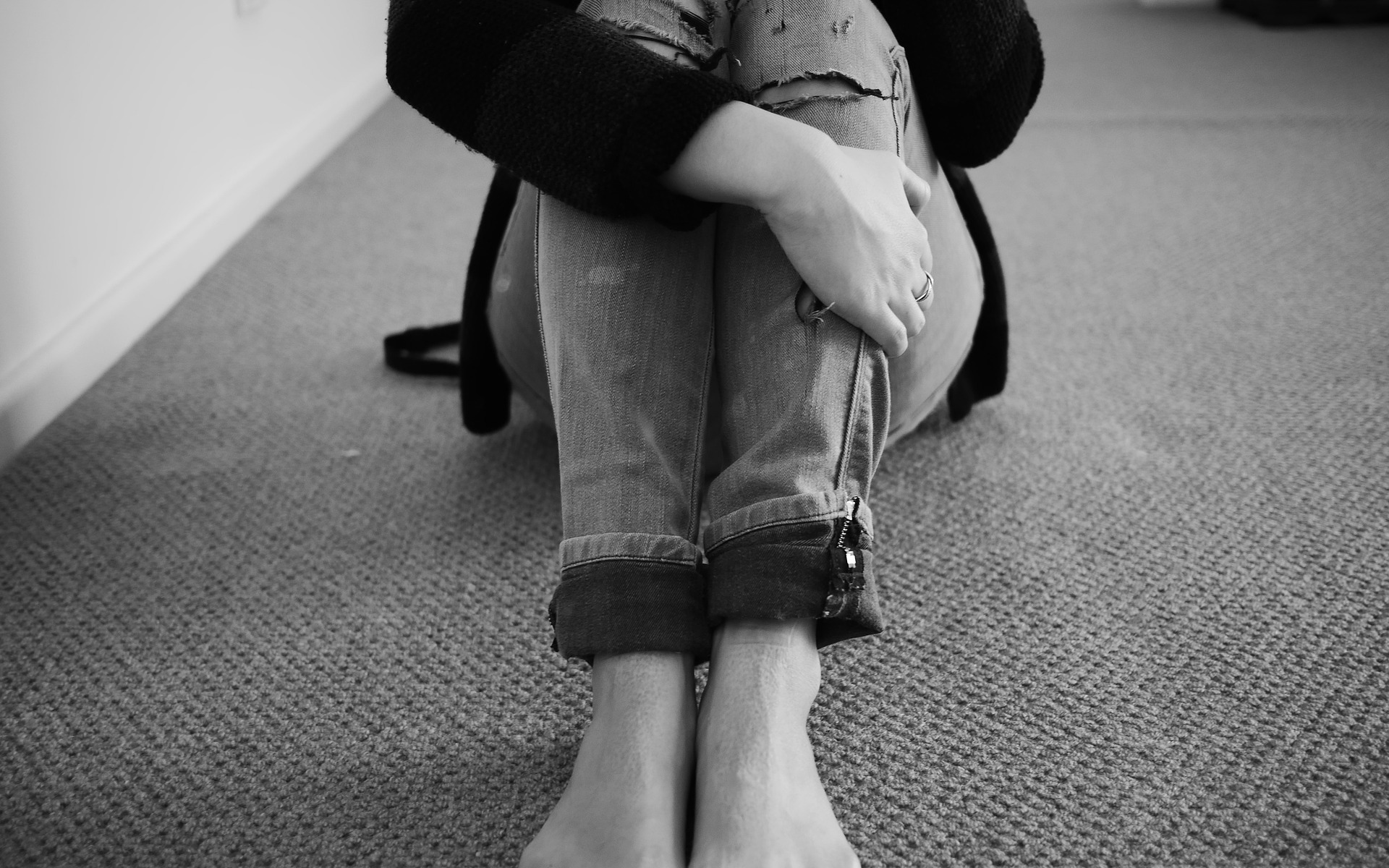 My eyes have been bad for so long, viewing dirt as gold and being blind to the treasure before me. I run after cheap copies of the real thing, then scream at God in desperation when he keeps them out of reach.

I am like the idol-maker Isaiah speaks of in chapter 44 verse 20: “Such a person feeds on ashes; a deluded heart misleads him; he cannot save himself, or say, “Is not this thing in my right hand a lie?”

I’ve been telling myself lies about God for years. He’s good, of course, but he’s not really good to me. He loved me enough to give me eternal life, but not enough to give me what my heart needs on this earth. And suffering, what do I make of suffering, both the general suffering of the world and my own private sorrow, the years of seemingly unanswered prayers and unexpected detours? According to my man-made scale, God has been judged, and found wanting.

I didn’t always question God’s goodness; there was a time when my mind was not disturbed by dark questions, when faith aligned with sight. It was in this time of easy trust, in 2012, that I wrote a poem from the perspective of one who believes in God’s goodness even when suffering doesn’t make sense.

The poem was inspired by a scene in my favorite novel, The Brothers Karamazov, in which two very different brothers meet at a pub and wrestle with this question that has been a barrier to faith throughout the centuries.

Ivan, a brilliant intellectual, is tormented by the reality that God allows innocent children to be abused. It’s not that he doesn’t believe God exists, but that he doesn’t want to associate with such a being. In his words, he “returns his ticket” to God. His brother, Alyosha, in training to become a monk, also feels tormented by the tension between God’s character and the suffering of children, but chooses to view Christ not as the problem, but as the solution. And this is the poem I wrote, from the perspective of Alyosha to Ivan:

This poem has taken on new significance because now, I have been both brothers. When I wrote this poem, I came firmly from Alyosha’s perspective. Over the next 6 years though, although I fought to cling to the truth, the onslaught of severe depression, long periods of loneliness, and hopes deferred tempted me further and further into Ivan’s cynicism.

In 2013, one of my dreams came true- I received a Fulbright grant to teach English in Russia, the country that the Lord had brought me back to time and time again since childhood. The dream soon dissolved into a nightmare, as the isolation was like none I’d ever experienced, and the spiritual darkness of the city was oppressive. For 9 months, I gritted my teeth and held back tears every day, and when I came back to the States, I nearly collapsed. A shell of myself, I had hardly enough energy to get through 2 hours at work, and at night, I was often assaulted with vivid, dark memories of the past year. My mental and physical health were the most fragile that they had ever been, and there were even times, when, driving my little red Chevy, I had the impulse to jerk the wheel to the side and see where a crash would take me.

Alongside the depression was the ache of an unanswered prayer, the one I’d been praying since I was 13, that the Lord would unite me with a man after His own heart, one whose heart for God’s kingdom beat in rhythm with mine. And like a drumbeat, each passing year pounded a resounding “no.”

And through it all, just like Ivan, my mind began to cannibalize my heart, to attack the very truth of God in me, my DNA as his child. It wasn’t black and white; there were certainly times of praise and trust and hopefulness, but nonetheless, I began to consistently doubt His goodness, and my heart spewed bitterness at him.

This bitterness, I’ve grown to realize, was sprouted from and feeds on my forgetfulness of His faithfulness. Because if I am nakedly honest with myself, He has been so, so faithful to me. But in the throes of depression, in the ache of rejection, I not only fail to remember what he has done, but I dis-member the past, I take it apart, throw away the times he shielded me from evil, paint over the joy he sang in the dark, and slice away the comfort of His presence.

And then, I re-member it into one where He was not faithful- I add my own embellishments before gluing it back into my memory. And even if He was faithful then, then His character has rapidly changed in light of a present reality that I certainly did not ask for.

Bluntly, when I don’t get my way, my heart is revealed as a muscle that pumps disbelief.

But remembering his faithfulness is what reveals these thoughts for what they are: lies.

The story of the Israelites is the same as my own: God is strikingly faithful, the people forget, complain, and lose heart, only to be shown his goodness once again. And God has shown time and time again that he sees me and loves me.

During those 9 months in Russia, he sent me two friends. A girl working at the university who had never met me had a dream one night that I was in trouble and that she needed to help me. The next day, she acted on my behalf and became a light in that dark time. And God made me a light to her-he opened her heart to long talks about God and salvation and the person of Jesus. Another teacher at the university befriended me and was revealed as a kindred spirit, and is still a great friend to this day.

In the midst of severe depression, the Lord surrounded me with my loving, supportive family and used me, in my weakness, to minister to international college students, some of whom who were experiencing the same isolation and loneliness that I had in Russia.

In my years of unwanted singleness, God has been good every time he has said no, as I look back and see that the relationships I so desired at the time were not what was best.

And the more I do that, the more I refuse to dis-member the past, but instead to re-member his faithfulness, to piece it back together in my mind, the more the lies lose their potency; they are revealed as stale words that are no match for the power of the Holy Spirit in this woman consecrated to her Lord.

Life is short; I’m going to blink and be eighty years old and blink again and be before him. And right now, my eyes see things through worldly glasses, and I have only faint ideas of God’s glory. And like Job, I know that when I finally come face to face with Him, I’ll fall on my knees and say “I was so wrong about you, Lord. So, so wrong. Forgive me.”

He has been renewing my mind and bringing me to a place of open trust, of a vulnerable heart, of a firm belief that He is truly good to me, whatever comes. And as I preach this to myself, I find myself faced with a test. Last month, a wound in my heart that I thought had been healed was violently torn open and revealed as festering beneath the surface. Amidst the shock of it all, I feared that I would spiral back into the depression that He had freed me from.

You see, I believe that Satan wanted to steal my joy. He wanted me to shake my fist at God, to again give advice to the One who created me.But I have a choice now, to go along with Ivan’s airtight human logic, or to believe that although right now, none of this makes sense, Jesus does.

Jesus has come to us, defying the worldly math and logic of suffering, bringing peace and joy and piercing our hearts at the sound of his name.

And in the midst of this battle, the truth is winning. I know that although the suffering does not make sense, that Christ within me is fighting for my mind to be renewed. He is fighting for me to grasp the depths of His love. He is turning what I saw as a spiritual attack into a spiritual surgery, cutting out the festering wound with the sword of His Spirit, the Word of God. He is placing his hand on me and saying, “my dear woman, I long to heal you, and I have, and I will. I banish this wound, I banish these lies in my name. They have no power over you; you are mine. The thief comes only to steal and kill and destroy; I have come so you may have life, and have it to the full.”

To read more about my journey, download my free book on singleness and satisfaction in Christ.